As I sit here in Ugg boots, long trousers and a jumper wishing we had not stowed the fan heater deep under our bunk, it is raining and the sky is grey. We are safe in Marina Stella del Sud in Vibo Valentia, Calabria. It is only about three weeks since we left home and I feel I’ve been here forever. Is this good or bad? But let me scroll back.
Since arriving in Sicily in mid April we have had mixed and generally unseasonal weather. Most yachts stayed put, whether to get their money’s worth out of their winter contract or simply waiting for the winds to become friendlier for wherever they are bound – the Caribbean, Tunisia, the Guadiana river or back to Greece. It has blown a hoolie in the marina and the air has been chill. A bright light was the presence of Mac, Sophia and family nearby. So that we could see a bit more of them we hired a car.
We thought, naively as it turned out, that we could simply walk into Marina di Ragusa and pick up a taxi. The season has definitely not started as no taxi could be found. We found a number on the internet – oh the joys of modern communication and no roaming charges. An hour later we were on our way to Comiso airport with a lovely young taxi driver who talked about the richness and history of this part of Sicily.
Hiring a car in Sicily is interesting. The first thing we were given on arrival on an earlier visit this year was a leaflet of how to protect ourselves whilst in possession of the car, lock the doors, don’t have your handbag on the passenger seat, don’t leave anything valuable in the car, always park somewhere public etc.etc. It did not however tell us how to safeguard ‘bits’ of the car that might be removed and that is what happened on our January rental! The first morning we walked past and did a double take, there was a hole where a plastic vent should have been. When we returned the car, eventually, having found it almost impossible to navigate into the ‘returns’ bit and feeling rather stupid and elderly, the young girl apologized for Sicily and said that only last week a whole wing mirror assembly from her car had been taken. Anyway on this occasion we got no such warnings and managed to complete the hire without incident. I am the driver so that Andy can drink, drink, drink – see http://www.songlyrics.com/mario-lanza/drink!-drink!-drink!-lyrics/  We took advantage of having a car to stop by Bricoman (Italian B&Q) and a big supermarket to stock up on drink, drink, drink etc. Have bought some blotting paper too…….. 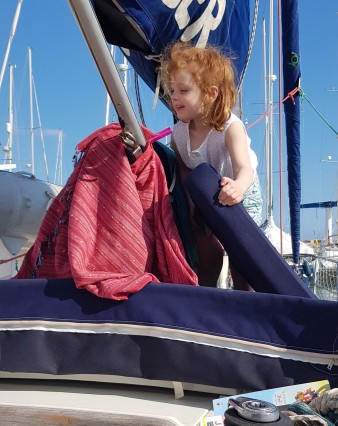 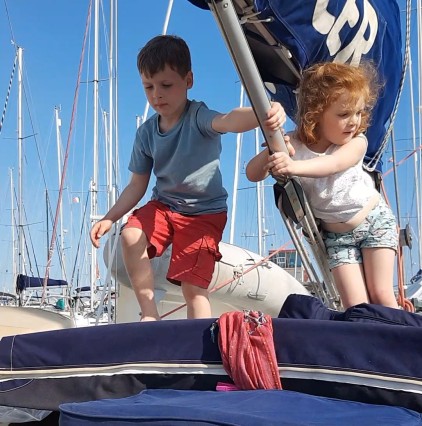 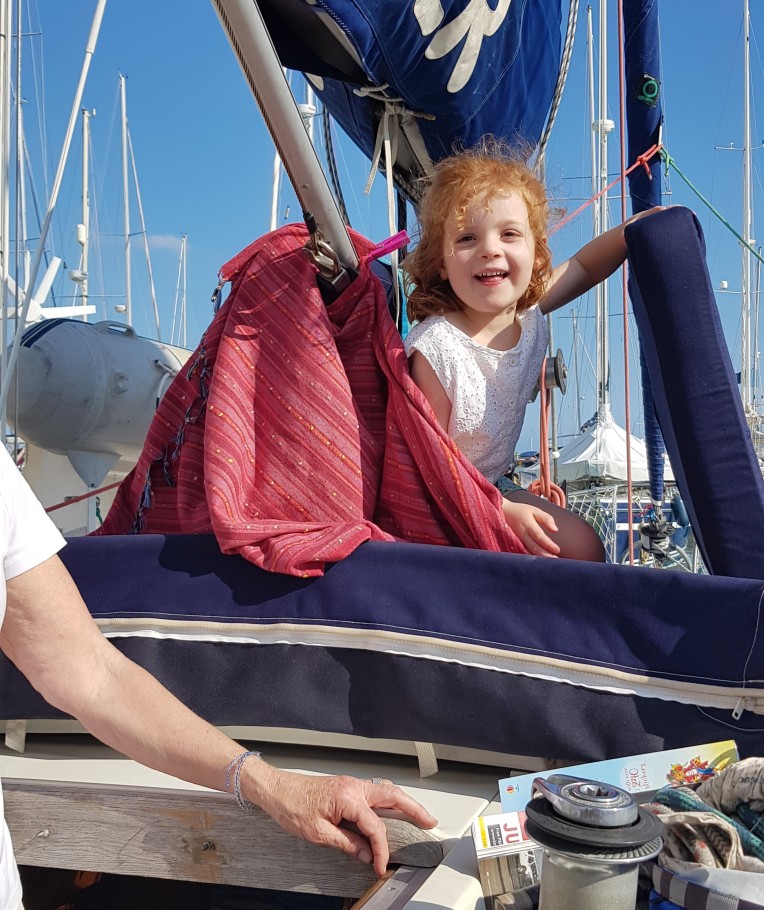 Mac, Sophia and the children came to the Marina on a sunny day and we had a fun time on the beach digging in the sand, finding shells, burying Tom, the kids quite impervious to the freezing sea. The sun did shine and we had ice-cream. We had time on the boat and it was lovely to see how easily the children fell back into life on board, remembering how to pump the loo, making dens on deck and Tom tactlessly beating Yiayia in his first ever game of draughts. I have to say tiger mummy was helping!!! 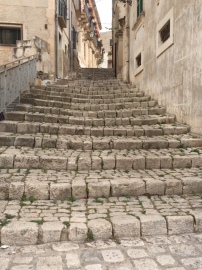 Then it was Easter, a chaotic and energetic Italian celebration. We went to Scicli – film location to Montalbano. ‘The Man Alive Festival’ takes place here with a procession of the risen Christ, fondly called Joy. There are pictures and a better description here https://www.sicilyseaholiday.com/en/festivals-scicli/50-easter-in-scicli.html I think it has lost some of its verve. We arrived at 1030, very British, very punctual. Sure enough a band was playing and the cheerleaders were proudly marching then suddenly all was quiet, everyone dispersed and nothing was happening, only a steady trickle of people making their way up to the church. We havered……… would we stay or would we go? Da rada dada dada da………………How to keep the children’s interest for the next three hours as we had been told that 1330 was maybe a better guess? One answer was people watching in a cafe with drink, a sweet treat and coffee. Looking around for another distraction we did eventually settle on a familiar climbing frame…….and then balloons. Now no one dare open the boot of the car for fear they fly away! 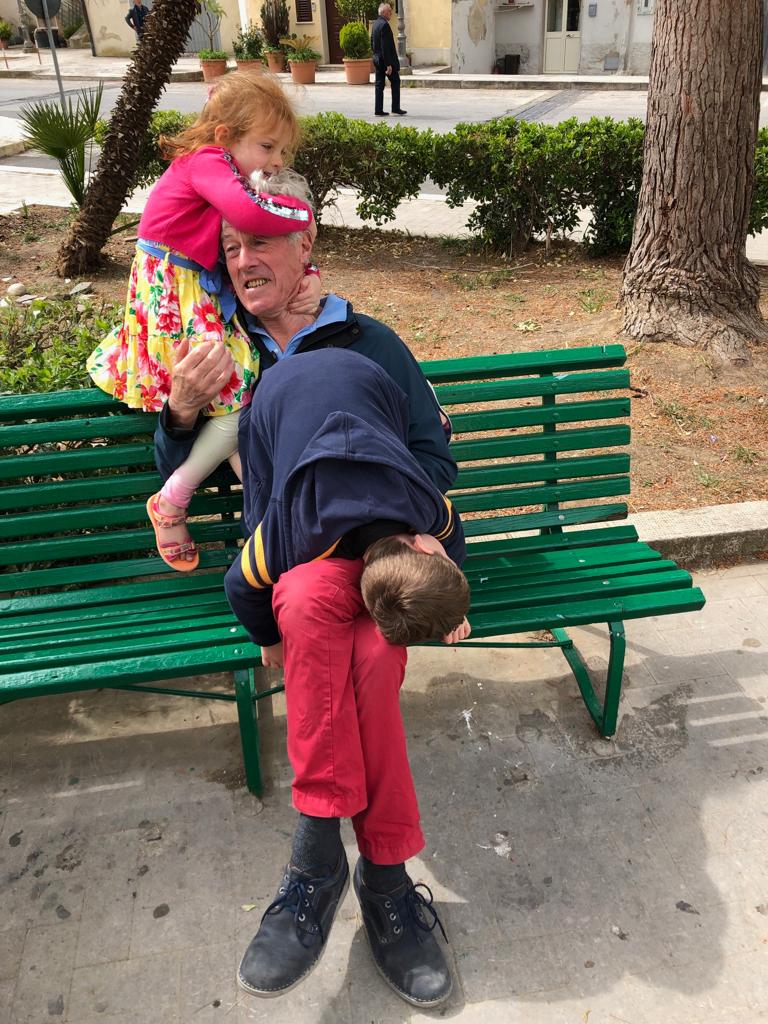 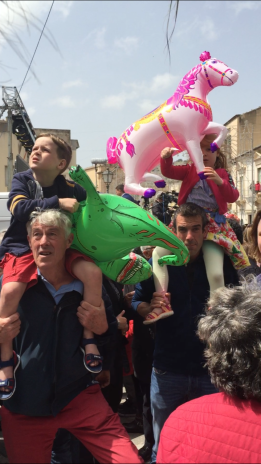 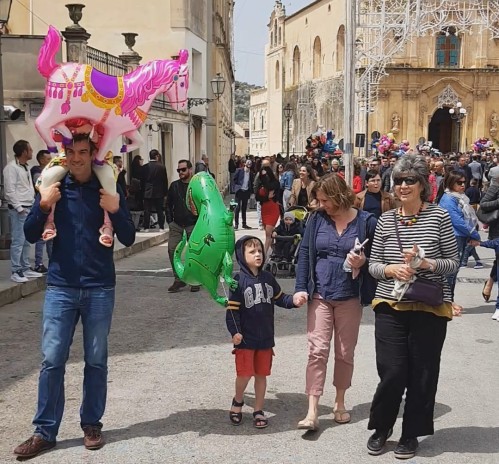 The crowd was thickening. At last, finally, in the distance I could see the statue of Christ emerging from the church. The statue wobbled its way out of the church and down the street, coming ever nearer. I imagine it is quite heavy and is born by strong men from the town with ‘Gioia’ emblazoned on green T shirts straining tightly over variously big paunches or toned six packs – more of the former. The adults thinking ‘oh good soon it will be passing us and we can be on our way’ having honoured our intention to see out at least one Easter show. But oh horror, he turned his back on us and wavered his way up another street. According to my informant to a cave where some ritual was carried out. We knew he had arrived as there were deafening shots of gunfire and fireworks rained down, sending puffs of black smoke into the air reminiscent of the declaration of a new pope. This went on for some time. Everyone was hustling for space to get a clearer view, little children played hand clapping games, adults met and chatted all was happy. Eventually Christ was in our sights again and tipping precariously from side to side, greeting the crowd he came slowly down the hill as flowers were thrown and there were a few calls of ‘gioia’ 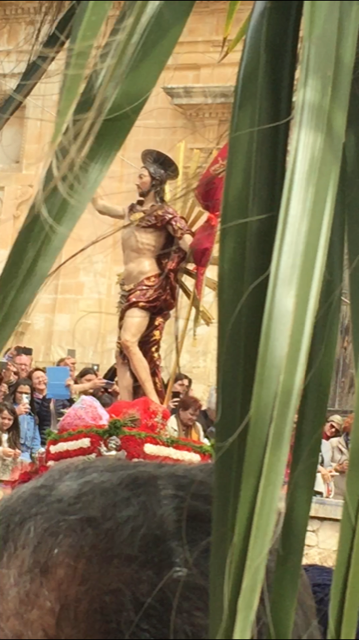 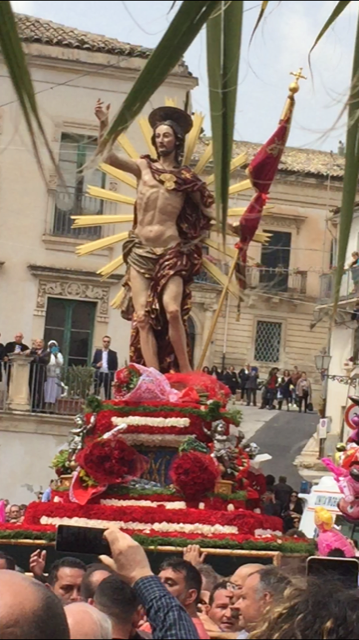 We were going to see the family in their villa near Ispica so I drove to a gorge walk recommended by them and we had a warm and heady walk. It was humid and sheltered from the wind and full of a fantastic variety of wild flowers, mallow, poppy, sage, fennel, vetch, borage and camomile. Then the smell of orange blossom and hay and the bleats of goats and the warning bark of a dog as we got too close to his territory. 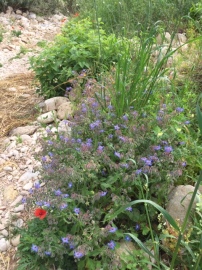 The family left all too soon and we still had days to spare as the winds were not being kind so we took another trip in the bus to Ragusa Ibla on one of the nice hot days. On our steep walk up to the old town we were greeted by an old couple whose obvious entertainment was to waylay every passing tourist and find out where they were from. After going through the usual list Deutsch? Hollandaise? Francia? And getting nowhere we told them Scozia – the response was astounding, one I’ve never come across before and don’t want to again……………. Donald Trump!!! AGH! He is the last thing I would want associated with Scotland, we usually get Celtic, Glasgow Rangers and whisky, whisky. Well we continued up and carrying on my obsession with Montalbano and the failure on our last visit to eat at the restaurant he dines in, we succeeded. We booked a table and then went for a wander which included a local wedding where everyone was dressed up to the nines and looking rather uncomfortable and a group of black guys playing drums to which the bride and groom were drawn but where the bride did not want to boogie. We returned to ‘Trattoria La Rusticana’ – in the books it is ‘Trattoria San Calogero’ – and had a very pleasant meal which includes the refreshing and delicious salad of oranges, onions and black olives. 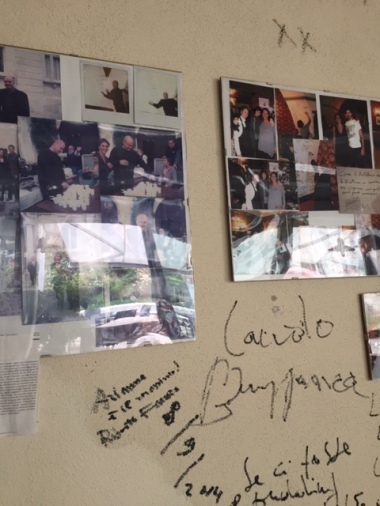 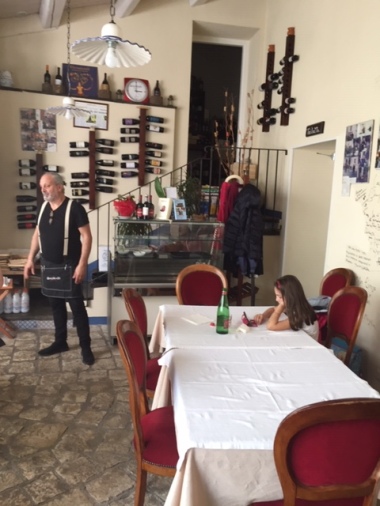 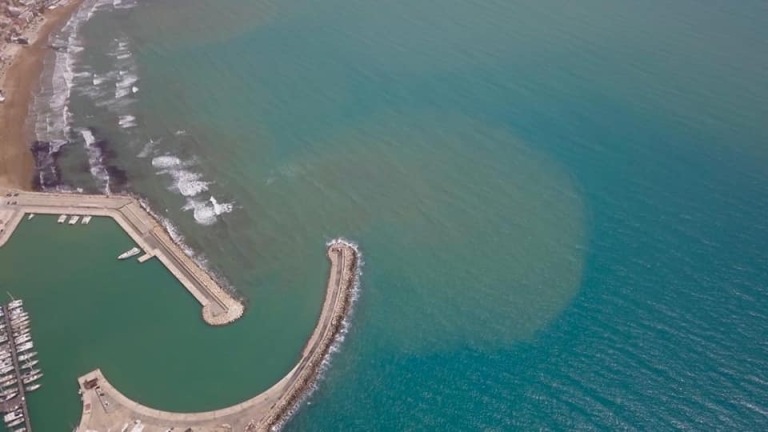 Our departure from Marina di Ragusa was a little edgy as the sandbar at the entrance was a constantly moving and unpredictable element however the marineros led a little convoy of us out at 7am. One split off bound for Malta and the rest of us were Siracusa bound. We had a lovely sail that day with the wind behind us and accompanied by the sun at last. A days rest and then we departed early.

This was a really tedious passage from Siracusa to Reggio di Calabria and is worth recording because it’s good to be reminded of the yucky days. Most are spent in the sun serenely floating, warm and basking like lazy lizards. The wind was against us the sea was short and choppy and we made slow and extremely wet progress. It took ages to get past Catania at the base of the south-eastern slope of Etna, this slope erupting like the skin of a teenager. We found leaks we didn’t know we had, that’s good I suppose. It was dark by the time we got to Reggio but there was a friendly welcome and the boat has been renamed ‘Selking Dancer’ by the Capitenaria – it sounded lovely in his heavily accented tones. 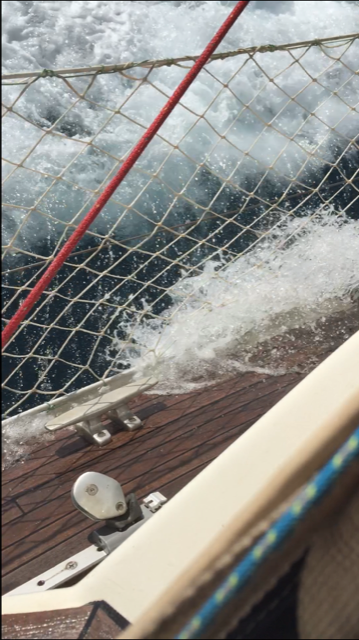 Off again, not at dawn for once but timed to make the best of the swirling currents and tides that surge in the Straits of Messina. During this passage we keep the ‘traffic control’ informed of our intentions and we passed through with no incident and no other traffic; through Scylla and Charybdis with no nasty monsters or whirlpools. The remainder of the journey northwards was so mundane that I had time to cook. Again it was a long day, arriving to Marina Stella del Sud in Vibo Valentia at dusk.
Our plans are made and then are changed. Originally I was desperate to sail the waters around Naples, the Amalfi coast, Ischia and Capri, romantic names, stunning scenery. However reality sets in, the weather, cost, time and commitments – we have promised to be at a party on the 10th May in Edinburgh. So that coast will have to wait for an open top car sweeping around the famous curves of the Amalfi coast.
Yesterday we took a doubtful day and a train back down the coast. In the background on one side, the mountainous interior of Calabria and on the other the sea, white surf on the waves, past green and fertile landscapes of olive and orange groves down to Reggio. Here we had come to see the museum where the new to me ‘famous’ Riace Bronzes are displayed. They were found by an amateur scuba diver, a hand spookily emerging from the sea floor. They are magnificent, see for yourself.

So next stop Naples but not by boat, by train and then a quick dash home for a party and return for an extended birthday weekend in Naples.